Coffee, snow and here we go! The last few weeks have been focused as we worked to stay on a developmental timeline for a film project. It is a project that we’ve only spoken about on a TV interview a few weeks ago. I don’t like to blow the trumpets on a project until full money is locked up in the bank. Our account opens on Tuesday and by the end of next week all funds deposited. This is a project that I was compelled to write and that really resonated with investors, actors and distributors. But even more important it resonated with me. I have to feel a connection to a role/film.

I often see films that make me wonder why they are lackluster in their execution but I think it starts with the core people. If you’re making a film only for projected profits or even just to make “something”… I think the special qualities never become fully realized. Think of some of your favorite films, even little films and they have heart. Now I’ve gotten on my soap box many times over the business aspects which we are also doing but the artistic is also important. When I see a project asking for volunteers in important artistic functions I know there is a good chance that the opening credits might be the best part about a project. I’ve also made sub par product in the beginning of my career but I can say it usually boiled down to budget, or lack there of. But even a few highly skilled artists with vision can do amazing things. Anyway, I’m not quite ready to fully announce this next project but at least I explained why. I will say that it is entitled “40 Nights” and is a period piece. We have some amazing talent on board and are still bringing a few more to task. It will shoot in Yuma, AZ in March so we will be departing this cold for a few weeks. Now let’s look at a few new film updates.

This weekend the FX and opening credits are being dropped into BESTSELLER. Next week we will have a marketing meeting with Chris Knight over the roll out of the film. Dennis Therrian is working on scoring the film as he does a final pass on sound design. The film may also be releasing another trailer soon. The film has really come to life and with so many distributors asking about it I’m confident it will please the masses.

WICKED SPRING new DVD artwork was released as well as the June 2nd release date. The distributor has begun talks with retailers and I am planning a few theatrical showings to kick off the PPV, VOD, BluRay-DVD re-release. I’ve had many fans reach out already to share their excitement. Thank you so much.

ASHES OF EDEN is rolling out nationally in May and we are all excited to promote this title. The reviewers are enjoying this film and I think audiences will also. I know that at least a 1st draft of a follow-up project with Mr. Hagedorn may be in his hot little hands. 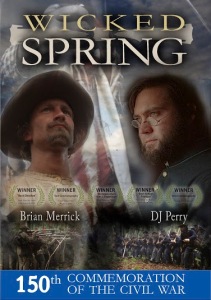 A slew of films were sent over for review by a couple of TV networks. I expect a couple of titles to be picked up. I have to follow-up on several foreign sales deals underway.

KNIGHT CHILLS II also released some 1st artwork and that script is moving right along. A shoot time has not yet been set but I would guess autumn 2015. The interest is there and I’ve even had some 1st distributor talks. Beware!

WASTELAND teaser should be getting close to done. The movie poster is being painted, yes I said painted. And the film edit should be about half way. We have also started some 1st talks with a CGI individual about the Sky Marshal ship. All very cool stuff!

DONORS – Official release next week with release dates and other information!

I have a 9:30 am coffee meeting with our director on the yet to be fully discussed film. So I’m going to wrap it up here and refill the old coffee cup.