Hello friends. It has been a whirlwind week of negotiations and talks on the home video deal for WILD FAITH. The film will be playing in three cities this week – Grand Haven, Holland and Florida. (See below) 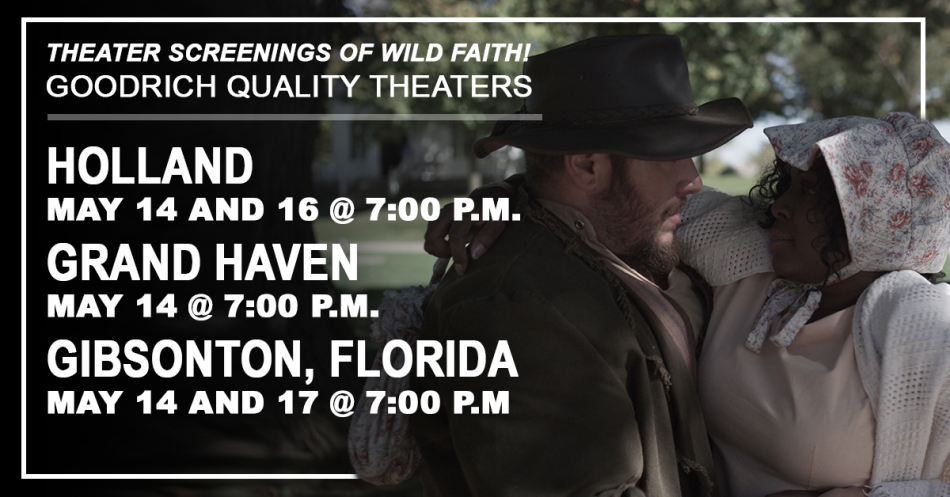 This is also the last of the off location pre-production on MBF. Our prep team starts in on Thursday and a week from that date cameras roll. We’re incorporating many new elements into this shoot. Some by way of new crew, new location (somewhat) and new cast in certain roles. We have a few exciting announcements coming this week. One is the addition of a co-star that will be well-known to some. He was a co-star on one of prime time TV’s biggest hits. We had a nice character talk yesterday and I’m beyond excited because he’s the right talent for the right role.

Becoming a character is serious business especially when representing…

Our schedule has caused a few switches in our casting but that always happens. By the time you get to the premiere you could never imagine anyone else in those roles. I’m trying to keep my TO DO list updated. I’ve been very happy with the time I’ve spent with ‘Paul’ my new character in MBF. To say he has been a challenge would be an understatement. My study of wounded warriors both physical and mental has been extensive. My appreciation and respect elevated as one fully recognizes the sacrifices made. I’m excited to see this story told and I hope that it changes minds and hearts.

Home video sales continue on “Forty Nights,” “Chasing the Star,” “Wicked Spring,” and “Ashes of Eden” which can all be watched on Amazon Prime. I’m touched by the beautiful emails that I’ve received from viewers of these films. If you have not watched any of them please do take a watch. You can recommend it to others on the Amazon site. DVD’s can also be purchased from the Amazon site. All our artists deeply appreciate your support.

Aside from these distribution, pre-production and actor work – we’ve been in development for our fall film. I think working with our distributor we might have landed on the right property. But I don’t want to go too far off on this direction.

If the WILD FAITH home video deal can get settled here in the upcoming weeks the distributor might get involved with expanded and marketing our theatrical a bit more. If the home video release is strong we will get a sequel or TV series moving behind it. There are a lot of moving parts with this deal and I’m doing my best to stay on top of it. I think everyone will be very happy with the final results.

I want to take these last few lines to celebrate my Mother and all those who give as mother’s do. I got to spend the morning with my beloved momma. She has always been supportive even when my dreams seemed unrealistic and far-fetched. I know many out there have been through this phase. Some have that support and others do not. But that is one of the reasons this blog exists. It is proof that you can follow your own path and create. It is not easy and if you can be happy and do something other than be an artist – I recommend it. But for the others – keep at it. Work smarter. Learn daily. Value your character in your dealings. Defend the artistic process and muster the courage to keep walking. One step after another – steady as you go and after a while – turn around and see how far you’ve come. My mother nurtured me to believe in my imagination and motivation – to achieve when you believe. Thank you momma. I love you.

I’m going to finish up here because I have some additional MBF work to finish. So far I’ve packed sock and underwear so I’ve got that going on. A busy but exciting week as we head towards onset pre-production. I’ll give you another update soon. You can also follow https://www.facebook.com/MBFthemovie/

I hope you all have a wonderful week. Be good to one another.