The Return Home – MBF Wrap Up

Don Most on set of ‘MBF: Man’s Best Friend’

I’m sitting in my lazy boy sipping the hazelnut coffee. It has been nice to sleep in my own bed and be cozy with my family. We have recently enjoyed a wonderful CDI shoot in Corunna/Owosso area and enjoyed great home away from home service at Quality Inn in Durand, Michigan. We got to enjoy many of the fine eateries in the area and filmed at many of the landmarks in the area. Many know that our most recent film was MBF: Man’s Best Friend that had themes of military wounded and shelter dogs. I encourage anyone looking for a good family addition to visit our friends at the Shaiwassee Humane Society. I got to work with the amazing staff and with many of the animals there awaiting you. We had a great visit from Animal Planet and we’ll be the focus of one of the new shows “Amanda to the Rescue” this fall. We had ‘Duncan‘ the two-legged boxer join our cast and what an inspiration. The VFW provided a fish fry that made this non-fried food eater give in just this once.

As for the art itself – I was so proud to share the screen with so many incredible actors and to work alongside such a great dedicated crew. (See IMDB.com) In all my years of producing I can honestly say this crew was just on point. I look forward to working with them again. I went to places with this wounded warrior character Paul Landings that I’ve not been on camera. These externally and internally wounded soldiers who live daily with this heaviness pushed me to complete truth. As the role ended I almost felt guilty because for many there is no WRAP on their role. They will still wake up to disfigurement or mental anguish and issues. It is why suicide rates are so high because how long can they carry the heaviness? Now dogs have proven to help carry some of this heaviness and to bring joy back into their lives. Emotionally I gave everything I had and I feel good about that.

Also when I was coming into our business – I did not want to do 1) Soap Opera or 2) Action films to start with. Both in my mind limited how audiences would look at you. I have a long history of martial arts study and practice but mainly use it for health and to allow me to do many of my own stunts. In this film I showcase a bit of my training and that was truly enjoyable. It actually felt very natural and I was happy that the crew seemed to really enjoy what we captured. Most of my fight scenes in the past consisted of deconstructing so as to not appear trained. I want to thank my fellow actors who performed with me and John Lennox who helped me coordinate the scene. I hope audiences enjoy it.

We do have one more pick up day for the film. It is flashback footage and will show war footage and Paul before being wounded. That will be the icing on the cake. We will be releasing this film again with BMG targeting early next year. 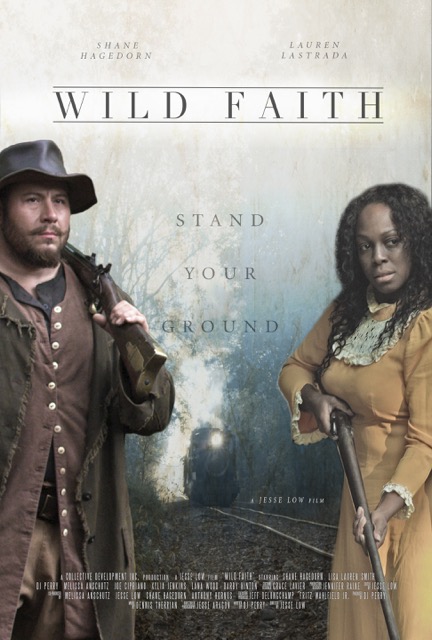 Speaking of BMG we’re in the final stages of putting together something exciting for WILD FAITH. We’re looking at a few more summer theatrical runs before a fall home video release. We also might be playing a west coast festival after being approached. We will know more about that in the coming weeks.

BMG is also the distributor of our biblical adventure films in THE QUEST TRILOGY. Both FORTY NIGHTS and CHASING THE STAR (2016/2017 ‘Most Inspirational’ at ICFF) are in the marketplace – Amazon Prime and many other specialty sites selling DVD and streaming. Here is one of the many new platforms –

Read about CHASING THE STAR

This Christmas part 3 THE CHRIST SLAYER will be rounding out the trilogy with a theatrical followed by an Easter 2019 home video release. The theatrical trailer will release in the coming weeks. Music moves into high gear with the feature starting this week with our composer Dennis Therrian.

So this week will include getting all the paperwork straight on MBF and catching up on yard work. I’m back to playing soccer today. It killed me to take a few weeks off but as the lead role in a film, an injury would have risked just too much. But today we’re back at it and I’m ready to roll. I hope you all have a great weekend. For those following along with our boy Luke, he’s going to have his third radiation treatment tomorrow on his sinus tumor. He is doing pretty good but of course I wish I could do more. He is still doing three walks a day, eating and drinking well just a tad slower.