40 Nights Prepares to Drop First Trailer and Other Ramblings

I’m on my TAKE 2 with hazelnut coffee. Went about this morning and one of the things I’m most happy with is that I bought an antique, cast-iron, wood burning stove for the office. It will not go in right away because I have a few other tasks to complete. Home improvements just seem to be an ongoing thing. We also ended up stopping by to visit my brother and niece. He referred us to a Vietnamese place to eat lunch. It was really good so, if you’re in the Lansing area. (Nola Bistro)

So in the extreme heat we have going on I decided I needed to BLOG all of you before carrying this wood stove out to the office. I might just ramble this week as I’ve got much to download. So Tuesday was the first day of our Lansing run of BESTSELLER. It was nice to have a few close family and friends see the film on the big screen. Each showing has had an audience that gets the opportunity to see it in this format. We will move the film to a few other venues but the more important development is the domestic US/Canada deal that we will likely accept. It will play great on home video/VOD for the masses but IF you can see it big screen you really should. It will play tonight at 6:45 and 10:45 in Lansing at the Celebration Cinema. Here is the promo video from our 1st public showing. It was put together by Dan Chipman who has worked with us on a few projects now. 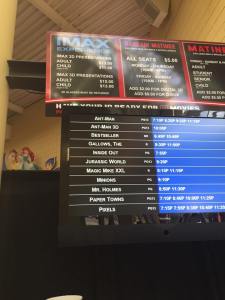 DONORS film announced that it had signed for domestic US/Canada with Jax Distribution. 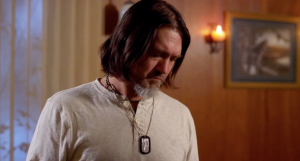 ASHES OF EDEN closed caption work is being finalized and I can’t wait for worldwide audiences to get their look after Oct. 13th, 2015.

40 NIGHTS – The 1st official trailer is DONE. The distributor is very excited to have this preview to introduce the project to worldwide buyers. All the people given a sneak peek really enjoyed the film. As a matter of fact financial commitments on the next couple films started to come in off just these sneak peeks. It is great to note that while I think the trailer is powerful the film itself is much greater. This is not one of those films that everything good was thrown into the trailer to lure people. This film trailer gives a taste of the journey ahead but the final film will be so worth the wait. PR will be done to introduce the trailer next week. Here is a screen grab from the trailer. ENJOY

DJ Perry as Jesus in the biblical drama “40 Nights”

Development has been full speed ahead. I’ve been planning between now and mid 2016. The script for a western is about ready and scheduling, casting, location scouting, budget refining and more has been underway. I will say that it is shooting in Michigan. No, we didn’t move to Georgia and the state can keep their incentive. (Yes. I know they killed it) I did an informal cast call (Two African-American actresses) last week in my blog. But that didn’t bring the acting reels out. Those casting duties will be addressed in good time.

The Winter/Spring 2016 film will be “Chasing the Star” and script work is moving right along. It is looking like it will also film in Yuma, AZ area. This is the 2nd film in the three picture deal that we have with Lightworx Entertainment.

I’ve had talks over a few films but unless the right role/project hits me – I have enough work to keep me very busy. KNIGHT CHILLS 2 is something that might also get done over the winter.

I could go on about more but I have a pair of apple trees to plant and a wood stove to haul. I’m very encouraged as I look from here and project five years into the future. The films we will make and the new audiences we will distribute to. I was so happy to have peers and mentors give such powerful reviews of both the “Bestseller” feature and the “40 Nights” trailer. I look forward to releasing the first official trailer to all of you. I also have the directors cut of the full “40 Nights” feature to review. I will be watching that very soon. (Thank you Jesse & Jon)

Have a great weekend!