Premieres, Parties and the Power of Positivity

It is a beautiful Saturday in Michigan and today is a good rest after a busy, busy week. I’m excited that I’ve been able to enjoy grilling and chilling outside. We had venison burgers and mushrooms last night. It’s been a couple of weeks driving hard towards our final goals while not being distracted by other distracting variables. I was witness to a few examples of drama this past week but avoided any participation. Drama, except when on the screen is something I try to avoid. It’s one of those distractions that often derails or delays people from their goals. I’ve gotten good at not falling into these traps. I will illustrate a few examples to perhaps help some of you out there. IF you think I’m talking about you – I’m likely not but you might be one of these people just for thinking that:)

The Power of Positivity

Some people just have broken, clouded, paranoid, delusional filters around them. You could say just about anything to them and they will pull an insult, attack or some negative slant from the communication. These poor souls will have a hard go of it in life/business until they reach some self realization. I’ve had previous business/personal relationships terminated because of these same issues. Insecurity, self-doubt and other self-defeating attributes can only be healed by the individual. They need to somehow learn to stop feeding their own negativity. I only allow those types X amount of time to figure themselves out or they are dismissed. I have more patience in personal vs professional. They often have to learn on their own where they cannot influence others with their drama. Unfortunately, this dismissal often creates even more negativity as these people seldom can accept blame. It’s ALWAYS someone else:) The world is against them. A self made pattern that these people are amazingly blind to.

Emails, text and written communication is worse. These individuals cannot tell directness from sarcasm and so forth. They project their own insecurities on the words. I’ve seen people refuse to compromise because they see that as weakness. What could have been fruitful on-going business relationships becomes one and done. Often these people are stricken with mis-directed anger that comes forth as spite and hate. Nasty venom from forked tongues that once spewed you cannot take back.

Others swallow their own poison – never venting on others but compounding their failure. If you’re downtrodden and negative because nobody will invest in your dream project it only makes it worse. People invest in positive people. If you carry negativity within yourself you will not inspire others to believe in your dreams. I call these people CHARLIE BROWNS. If you’re constantly complaining POOR ME and HO HUM on social media walls – you paint a picture of someone nobody would or should invest in. I see so much pitiful self bashing as much as I see hatred towards others. I see artists who don’t realize that some choices are just different versus better. I’ve seen people with no qualifications judge others. Those people who stand alone in their own glass house and foolishly throw rocks at others. It’s only a matter of time before they find themselves cut and broken in their own ruins of a shattered glass house. I’m happy to say in these situations I witnessed-  I stayed in silence and focused upon the important work at hand. But I see these toxic behaviors around me and it doesn’t surprise me when these people implode. Be happy, positive and productive. I truly would love to see these people change but only they control themselves.

All this leads also to the topic of tonight’s “fight of fights” GET READY TO RUMBLE!  I was a fan of boxer Manny PacMan prior to filming in the Philippines.  But after seeing how he has helped his nation with his success and how they honor him – my respect for him grew. He is a humble, spiritual warrior who gives his all each and every time. He has a depth of spirit that reminds me of Bruce Lee, another childhood hero of mine. Now, Mister Floyd can fight for sure but he really seems to have an ugly demeanor and messed up priorities.  I hope he gets taught a lesson that money can’t save him from. This example can apply to successful people in our film business. Wear success like a humble hat. People will respect that much more.

ASHES OF EDEN Oct. 6th is the new wide release. We are closer to announcing some west coast theatrical play dates. Stay tuned!

BESTSELLER – It is being final mastered! 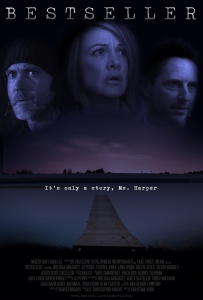 LIVE IN MICHIGAN? Do you want to see the 1st public showing of BESTSELLER in a cool historic theater? I will be there as well as many of the cast and crew. Info on how to get your tickets below.

“40 Nights” – Post work is underway and this week we released our 1st Official Teaser poster.

NEW interview link below that gives some great insight into the filming of “40 Nights” – Interview by David W. King. Thank you my friend.

THE TERRORIST – is also DONE. I need to watch my producers link of the final film. It will start playing for distributors in the weeks ahead.

WASTELAND Tales of the Desert Part 1 – We will have an official poster soon and I will let you all know where you can see this film play.

To bring this full circle – “Don’t HATE, CREATE! The secret is to keep moving forward and not being distracted by all the silliness that some individuals can create. Pull them like weeds from your garden and watch what grows.

I had one reader ask me about the film “IT FOLLOWS” – It was shot in Michigan and my brother watched it and liked it. I don’t think they reinvented the wheel with it but it IS a positive step for distributors to seek independent product. Radius, the distributor –  is owned by the Weinsteins who build their company on a handful of indie directors. I would love to see more companies with P&A $ take a limited chance on some strong indie films. So, I think this was a good thing and big congrats to that cast and crew.

I’m going to go work in the yard some so have a great weekend.