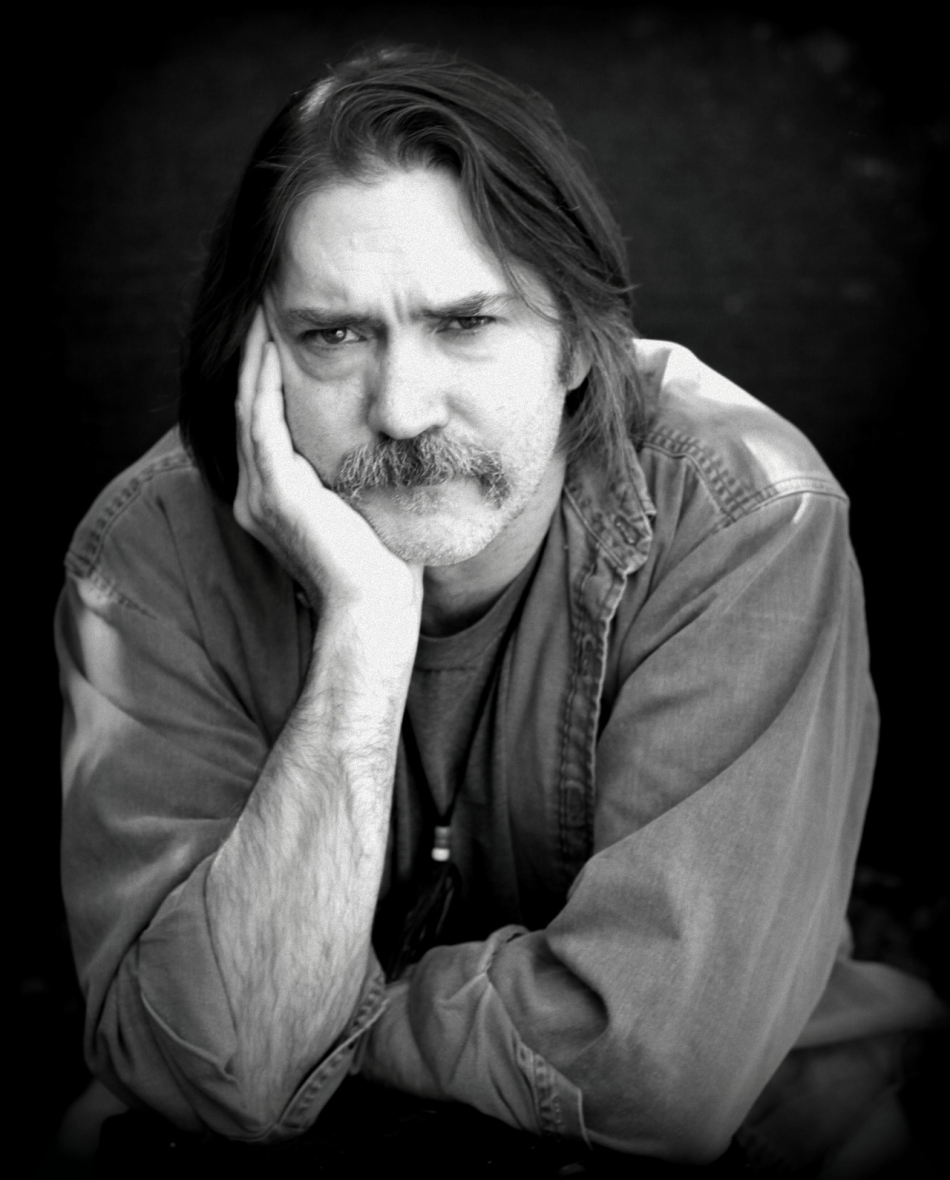 I’m sitting here sipping my hazelnut coffee. I have lots on my mind. Artist or those who follow the dream of being an artist as a career start young. Many fail because the endeavor is hard. Not that many other things aren’t difficult but many just don’t fully “get” the artist mindset. As a young person it can be you against the world with little to lose and everything to gain. That is why many make their run at it by often moving away or by making personal sacrifice in hopes of gaining a foothold.

As you get older that dream may still persist but also life may lead you in other directions. People fall in love, become parents and sometimes they cannot keep up the battle financially. The significant others brought into this circle often battle to understand and be supportive. I’ve said before, when I get an opportunity to do what I love it creates a hardship of sorts for my significant other. Domestic tasks usually handled by two now fall upon the shoulders of one. But living with a frustrated artist can also be a detrimental state.

That is why you always see so many ‘special thanks’ in the end credits of a film. The “others” help a film get made usually by holding down the fort. Everyone has an artistic side to their nature but it’s those of us who are truly driven by it like a compulsion, an addiction to create who take a special someone. Many artists live in isolation of being truly understood. But there exists those who recognize and respect and love these traits in an artist and support them despite the hardships. These people are special and deserve to be recognized.

One of our close producer/actors at CDI just lost their special other. An intelligent and practical man whose art manifested through his cooking. Some cook and some make it an art and this gentlemen made it art. He actually did some craft service duties for us last fall on an upcoming short film. The director loved how positive and helpful he was and I think he finally was really getting it. It can be hard for the significant others to not be in that bubble. To see but not share in that enthusiasm that radiates from artists doing what their heart calls them to do. But on this occasion he was part of it. He felt it. The TRIBE. He enjoyed the experience so much that further talks followed whereas this might become more of a norm but alas it was not meant to be.

Saturday night just before the big lightning and thunder storm he went home, a tragic victim of an aggressive cancer. His last words were “you always think you have more time.” How profound and true these words are and they should be a wake up call to some and a reinforcement to others. These words inspired and haunted me but ultimately encouraged me to cherish the time we have here. To appreciate the people we share our time and lives with. So quit that miserable job and run that charter fishing business if that is what you always wanted to do. Don’t put off writing that book that has been in your head since college. Embrace the now and know time is fleeting. I think I have always tried to follow my passions and use my time wisely. Because one day our own sands of time will trickle down the hourglass and the journey will be done.

BEST YEARS GONE – This story has been in heavy development with casting, costuming and consulting. We are looking at going old school by breaking the shoot up into a few shorter blocks grouping together scenes that require less and more. This is more like filming in the earliest days but will allow us to better control the size of the crew on certain days and damage control should we have any virus issues. I’ve just about got a handle on my character and others have been doing the same. It is now almost time to start getting those puzzle pieces/scenes. I think audiences will love this film again a powerful mixture of serious issues wrapped in humor. Life can be tragic but it can also be funny and sometimes both. This film captures that and we will once again be proud to bring that to audiences worldwide. 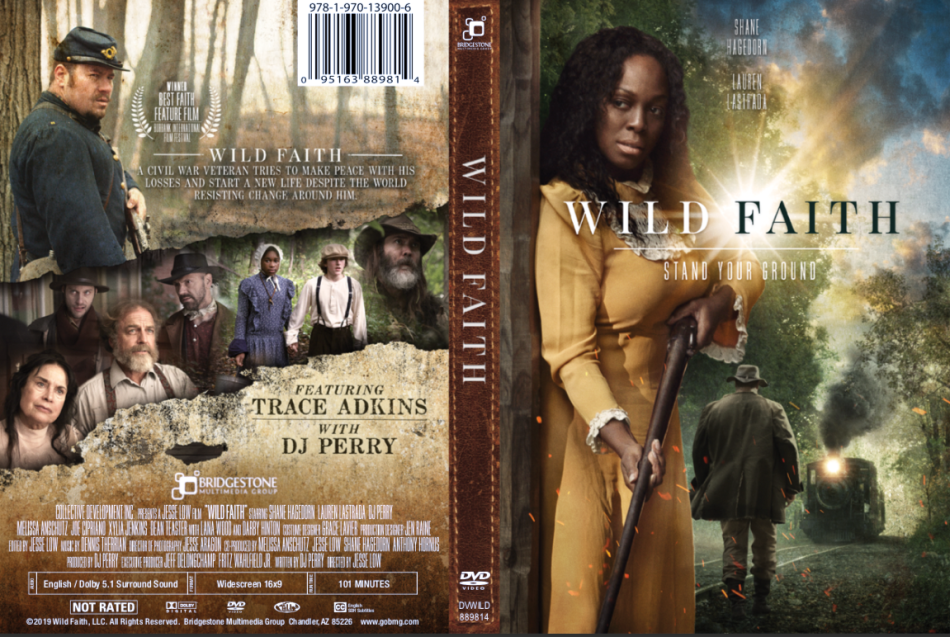 WILD FAITH – Worldwide this film has been expanding and is being viewed by millions of people. I think this is a great film again serious and humorous and is proving to be enlightening. I’ve read just some amazing fan mail about this movie. I’m so proud to say that all this attention and appreciation is building our audience to the TV series. We will be working hard over the winter to put the pieces in play. A spring 2021 shoot schedule would be ideal and I think it might all fall together. While it might not be everyones cup of tea (as if anything is) it is loved by many. Thank you to all the fans worldwide. 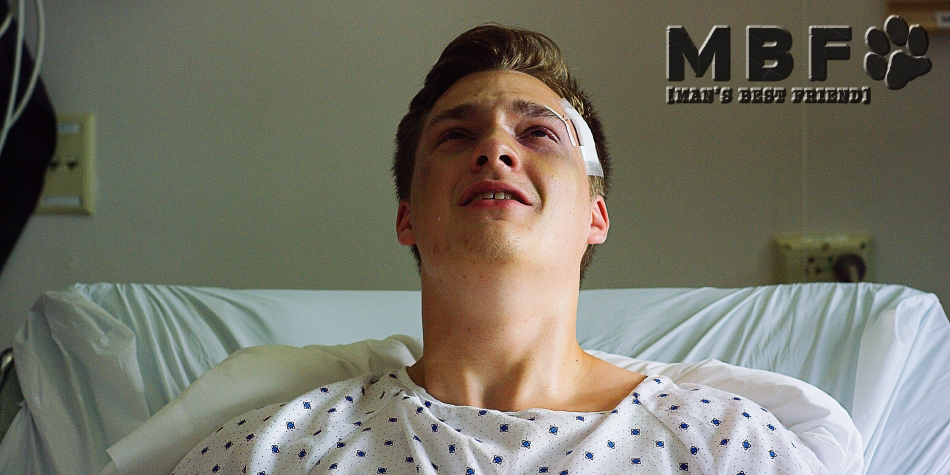 MBF: MAN’S BEST FRIEND – I had several people reach out having finally got around to seeing this film. I’m guessing maybe it had something to do with National Dog day. This film is a bit more intense than some of the other CDI fare that has a good dose of humor but the subject matter required it. If you love animals and want to see a powerful drama please do take a watch. 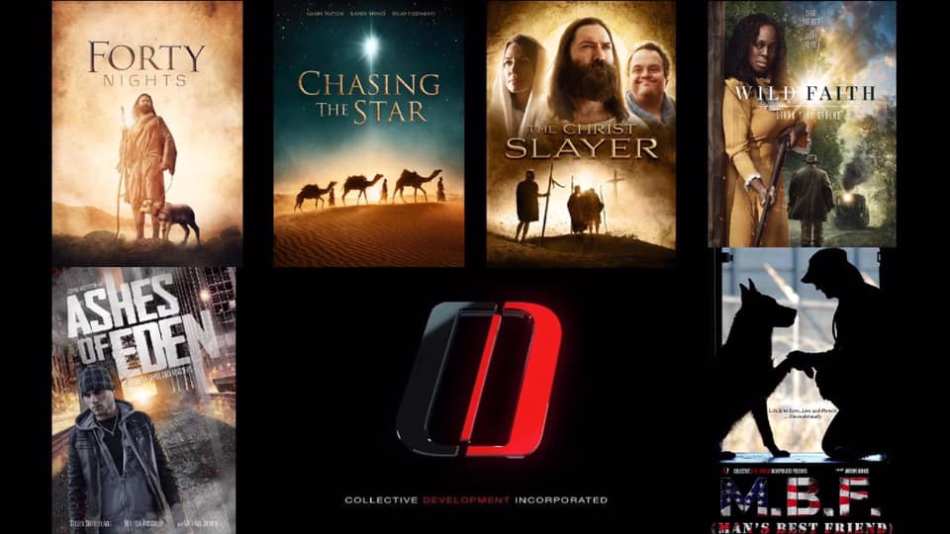 THE QUEST TRILOGY – We’re prepping this trilogy for the holiday window fast approaching but you can watch at anytime. Part 1 FORTY NIGHTS, Part 2 CHASING THE STAR and Part 3 THE CHRIST SLAYER – enjoy!

LOST HEART – Our distributor has approved the EPK kit and so PR will start rolling soon. We have several of our stars doing national spots and the planning for our cast and crew screening is full on. Our goal is to have millions tune in for a one-night only event via ENCOURAGE TV. This will be an event with pre-show interviews and well wishes. Following that event the film will move to an exclusive window with one of the many interested networks and finally home video streaming and DVD. I was speaking with Josh “The Ponceman” Perry who is one of our stars yesterday. He absolutely owns the screen but I could say that about so many of the cast. I’m excited to show our artists and after that – the world!

FOR THE LOVE OF CATCH – Our in association documentary film about the origins of wrestling is underway. If you have an interest in wrestling and want to see how you could get involved feel free to reach out. We are gathering interviews and will make a great entertaining and informative film. 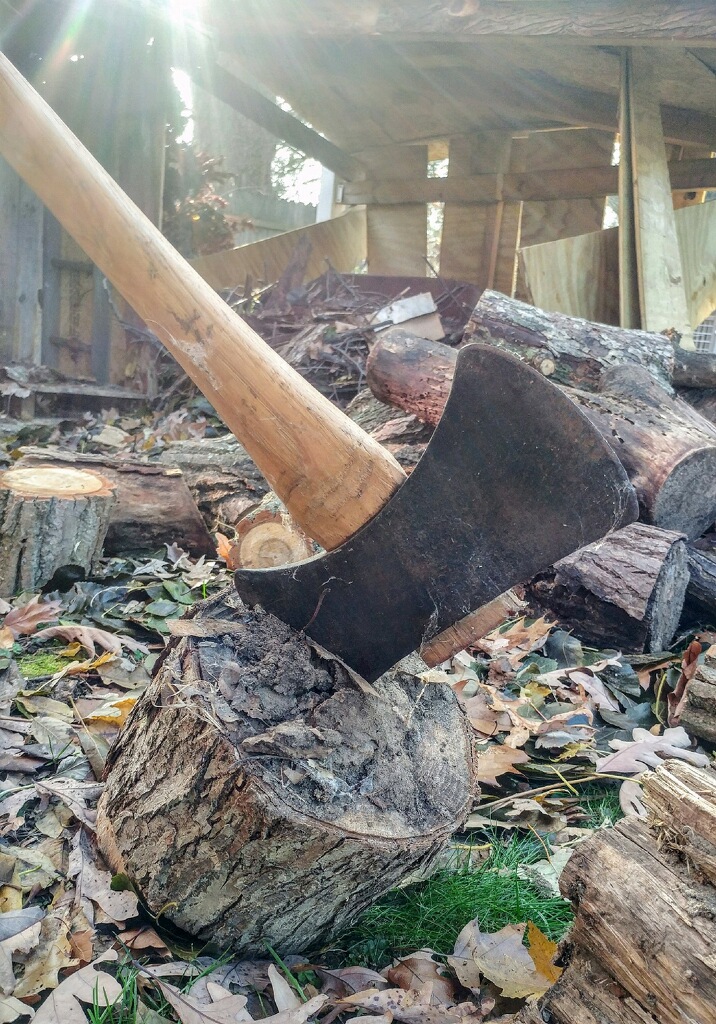 WRAP UP – The film work keeps moving forward. This weekend has been busy as we know have a coop with our “golden girls” getting adjusted. We fired up the new stand up freezer and stocked it with the pig and transferred over the venison. I also bottled the dark “Autumn Ale” and will likely rack the wine in the next week or so. The garden is growing with the fall veggies and even the hops are getting close. So I’ve felt a bit like a farmer as of late but I find it all very relaxing. I will leave us again with that powerful truth that we always think we have more time. So if you have things you want/need to do don’t keep pushing it off. DO IT.

Be good to one another and I’ll see you all in September:)

Today’s time has been filled looking for the return truck to carry gear that came from LA. Several departments have been securing props and wardrobe for transport. Key Set PA is looking everywhere for walkie’s that did not get returned during the excitement of wrap. These are all elements to breaking down the circus. By circus, I mean -film circus. We’ve just completed another amazing task of telling a feature-length biblical-era movie told largely in the wild deserts of Yuma, AZ. I’ve been living out of a motel for weeks, working hard with a very talented group of artists. After reviewing footage, I can say that once again we captured some movie magic. It’s all about a group of artists who care about the product. It’s not just a job, it’s a calling. Or maybe a disease:) 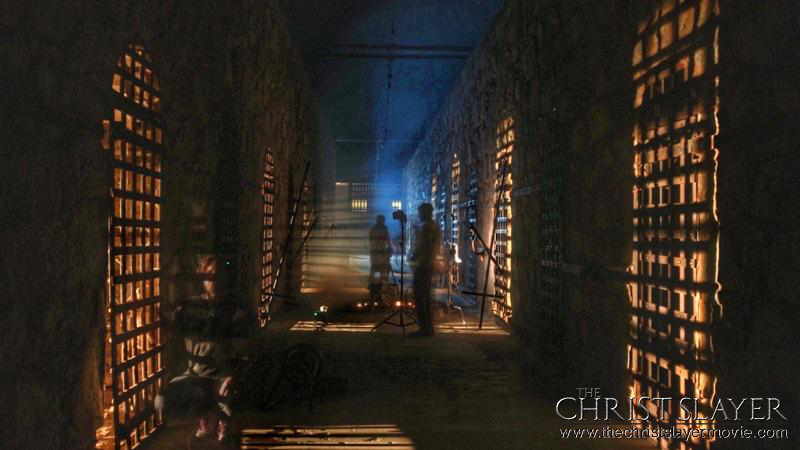 We pick ambitious goals and we strive hard to try and achieve them. That’s the great pride I get from visitors to set who talk about our professionalism. The distributors who know we work hard to bring art with the solid business. Our last director here on “The Christ Slayer,” Nathaniel Nose suggested the slogan “The CDI difference” – which is actually quite catchy:) Hey, we don’t always do everything right here but we’ll get caught trying to do it right every time. Best Effort’s is our motto and when challenged we sometimes discover where our best effort stride actually IS. These films keep getting stronger because the people involved are giving their best efforts. Yes, they tire and slow like us all, but they take pride in their work.  They put the gloves and boots back on and attack each new day. It’s a huge collective effort and it always reminds me of the truth that lies at the heart of our company name – Collective Development Inc.

I will say a few words about the role of Jesus. He’s my 1st character I’ve played in a film twice. What an interesting and complex role to become twice. I’ve had several fine moments of pondering WWJD in different moments. I guess that’s what led to these stories in part. Well, Jesus has left the building and ascended to higher grounds. It’s mighty refreshing to let some of that heaviness go and to knock down some of that giant Jesus beard. 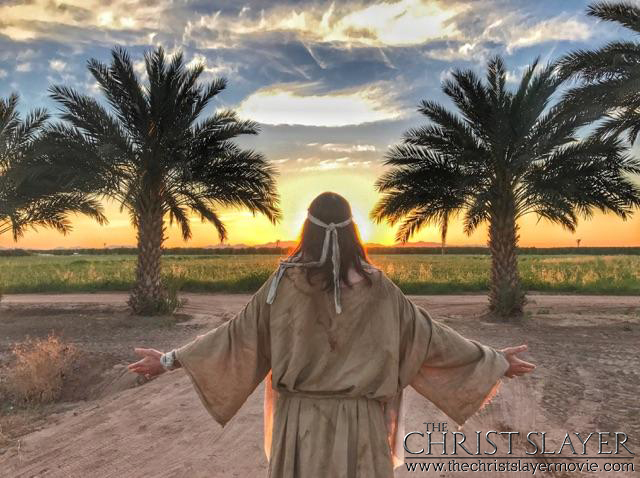 I’m going to return home this week and need to go finish breaking down the circus. But ahead of us lies music and sound design for “Wild Faith” – a new domestic release for “Forty Nights” on 4/4/17, a Michigan premiere and theatrical release of “Chasing the Star” and “The Christ Slayer” is officially in editing.

I’m looking forward to seeing family (Happy Bday baby) and friends, soccer games and working in the garden and yard. Almost time to turn that soil and fire up the grill. I will say that I feel accomplished now having finished The Quest Trilogy. 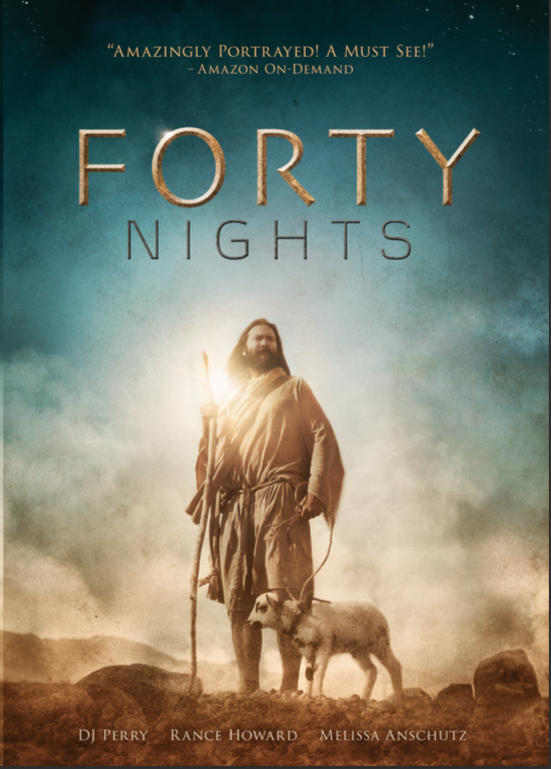