I’m once again sipping the hazelnut coffee and feeling good about the week’s accomplishments. It has been a hard week in some ways simply because for me it is A) Keep business as usual moving, which is on many fronts with our library of films B) Promote the most recent releases C) Prep the new projects about to launch

It has been trying in some ways because I’m dealing with the pre-hiring practice of discussing deal points. Here is that point where after explaining the business model of three nearly identical films in a series – people want to try and go outside that model. You have to have people who really believe in a project and want to put forth their very best. Some people got the call to see if they wanted to return and work on the second film. Some are returning and others are being replaced. In this industry people wait for that opportunity to step UP because someone else stepped DOWN. That is often the way. Are you going UP or DOWN?

After this Quest Trilogy is complete we will be adjusting our slate to larger budgets. I had a few people say, maybe when you have more funds in the future, contact me again. I was just honest, No. I will likely be working with the team we develop during this “team building” phase. They must trust in our path and be willing to grow with us. I’m not asking for volunteers, free help or paid with credit – this is offered work. I’ve been doing this a long time and I firmly believe what is to be, will be. Casts in development may change but once a film is done you could never imagine anyone else in that role. Crews create the “perfect storm” with their collaboration and determination. They win those daily battles that give them the holy grail of movie puzzle pieces. Those battles are the tales of old men many days from now. I’ve looked back on battles fought 15-20 years ago. I’m damn proud of most of the artists I’ve ever worked with. We share history, life and collective art. Once done – you can’t take that away.

We had a great compliment while in a meeting this week. Someone in our circle had recently worked a larger million plus dollar film and it was hectic and chaotic. They said, they didn’t fully appreciate the experience of working with CDI until they worked on that film. I’ve heard that story from several people and I’m proud of that. We work to TRY and achieve that but you must go that extra mile. It shows that money will not buy RESPECT, ORGANIZATION or RESPONSIBILITY. How much money was thrown at problems that were emergency reactionary because proper planning was not done? Probably enough to make a movie:)

I’m also trying to develop the next group of artists who want to make a living at this. It isn’t about the short game I can tell you that. A recent conversation – on public relations. Early in my career I tried to promote our film endeavors more within the state (Thank you Michigan Vue – miss you) but back in the day, the feature filmmakers were few. Newspapers and magazine wanted to follow more theater and any number of silly trends but seldom gave filmmakers a serious spotlight. As our success grew elsewhere with newspapers, magazine, fanzines and such taking interest in our work (I have storage crates full of paper PR from around the world)- It also gave rise to some local Michigan dreamers unwilling to invest in the hard work. For many years, anywhere I would go for a drink or to socialize, everyone had a great idea for a movie. You got a script? No. Money? No. The story repeats itself.

These “ideas” came from all places including some family/friend connections. Filmmakers are seldom at a lack of “ideas” it is money they lack. My Uncle Bob was in the film business but due to trying to hide his actual age from some in-laws, he gave me the arms length treatment. I wasn’t asking for handouts, I was ready to work. Even some REAL advice would have been helpful. But years later the tables had turned – Any chance of hiring him? I guess, I didn’t really give it much thought.

Locally, I grew up in Lansing, Michigan. I went from Northwestern Elementary school to Michigan State University. I have friends from first grade on up and still play in a Men’s soccer league. Years ago when news would hit our local state media, my closest friends or associates would sometimes seem off around me. Maybe having your face in the video stores, posters or on TV makes some uncomfortable. I understand that. 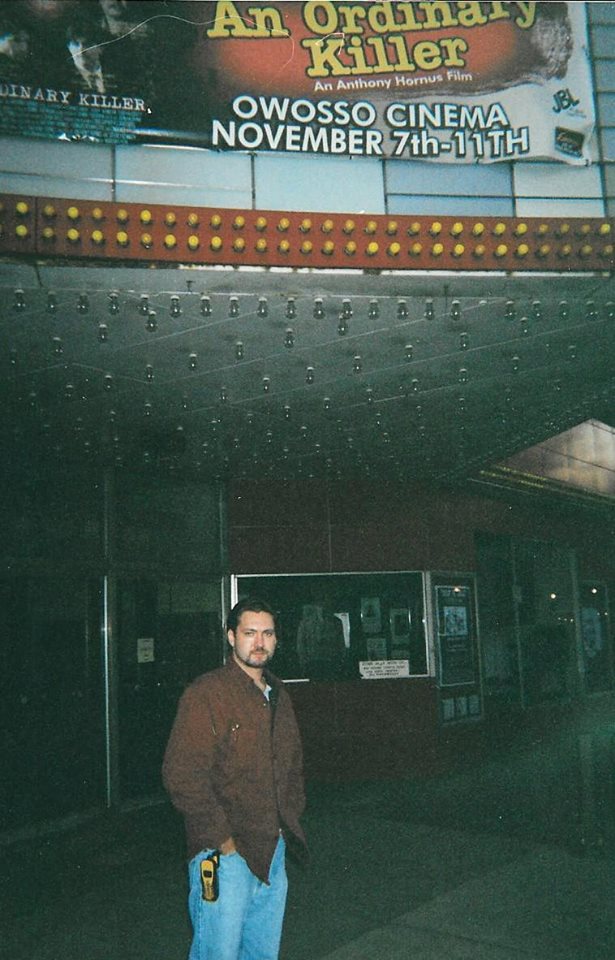 Outside the Owosso theater before our premiere of “An Ordinary Killer” – NOTE the “yellow brick” my deal making cell phone. I was well known in Hollywood for that construction phone. I was always building.

But, actors are just people. But it was odd and annoying for some of those friends/family I’m sure. I was the guy with a beeper and agents calling. Talking about places, people and things my closest didn’t understand. You can explain co-starring in a film in India but unless you lived it…very hard to convey. Now, I enjoy my quiet in Lansing, Michigan. I would say I get much more done than most because of living here. In my many Hollywood business travels, they were always amazed because I was’t just talking, I was coming to them having done. I have many relationships in Hollywood and some still not mined.  You want to come at a deal the right way. Many beg, plead, dance, ass kiss and such for an opportunity. My opportunities come on equal ground and where a mutual positive potential is present. The funny thing is for the appeasers in Hollywood and elsewhere, most of their hoop jumping doesn’t even promise results. It’s not a “this for that” deal. It’s “do this and this and this and this and maybe…maybe we can see if anything can be done” lure. Don’t take the bait. Don’t watch the flashy hook being pulled through the water.

And when these people get trampled and burned in our industry they became jaded and hateful. Sad people who live in sight of their dreams but never touch it. They have straight up actor ghettos in Hollywood. Bars that are filled with the failed and broken. Go off the strip of Las Vegas to see another example of this. I’ve seen these circles exist in the smaller markets like Michigan. Social ghettos where struggling artist meet to try and establish some pecking order amongst themselves. Many followers of the fake it to you make it clubs. A mutual life boat of hope that loves to dissect and critique art despite the fact that styles vary and change. People still jump on bandwagons. There was a slew of wanna be PULP FICTION like films after that released. Funny thing is many of the critics, sitting around the craft beer watering holes, were shoving crayons up their noses when we were making films. I have found some very talented young filmmakers and I ask for patience in my dealings with them. What were they doing seven years ago? You can see what we were doing – being #1 western rental. Actually that remained for 7 weeks and stayed in the top ten for 17 weeks. 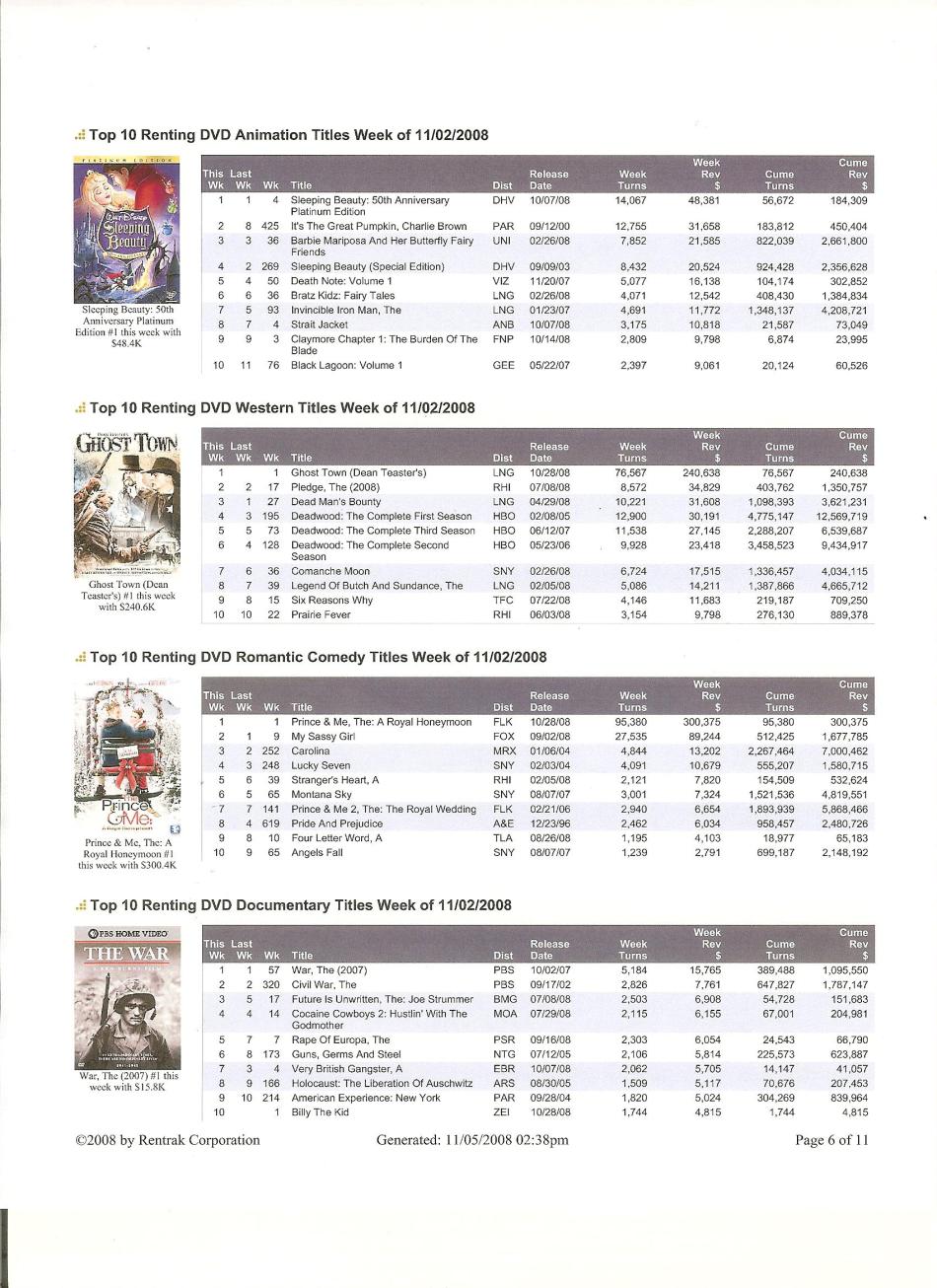 If someone is going to boast something to me it better be real or based on some actual knowledge, experience or facts. If not, I will call you every time. I’m offended by idiot statements and I’m allergic to stupid. So most of the time I don’t travel in places where I may be forced to be brutally truthful or where the BS is just too unpleasant. In our production circle you are expected to keep the drama on the screen. Only a handful of days to act like a professional on set- after that you can go all Charlie Sheen on your own time.

To bring it back around – I don’t promote as heavily in my own home state. It’s my shelter. It’s where after weeks in the Philippines, I want to come HOME to. I like to be treated as a non celebrity most of the time. I do enjoy some great sponsorships in leather goods, hot sauce, candles and more. I’m still waiting on coffee:) Call me. So I do enjoy a few perks here and there. Our CDI projects we’ve produced are in broadcast around the world, streaming, DVD’s and more. I still get consistent fan mail (emails these days) from people who appreciate our collective works. This blog was started so I could talk about films and my industry, maybe giving the guidance I lacked early on. If you wanna know what is going on with me – you can stop by weekly. If you don’t – I won’t be filling your ears in person with my boasts. I don’t need to – I like this saying. I’m not quoting here. It went – when a person drives a BMW, which is a good car but not a great car, they race around, trying to show people how fast they are. They are revin’ their engines trying to draw attention and tell people they are fast. BUT…When you drive a Lamborghini, you just cruise about. You don’t rev your engine, don’t need to boast and race about trying to show you’re fast. Because you know you’re fast. Arnold Schwarzenegger said that. I’ve always liked that approach and I do feel that confidence. We live quiet but we are capable of great things.

Many years ago, I saw a greater picture. I didn’t just want to be known for our art in the USA – I wanted to cross lines, build bridges. This work started many, many years ago. Now, this blog reaches 80+ countries and we keep widening our film sales deeper and deeper into the world market. I am not making films for the little pond of Michigan but for the expansive ocean of audiences worldwide. That said, I love and appreciate you all who follow our art. For the peers striving – draw strength from yourself and once you find your audience – their appreciation will feed you. Be smart. Speak less and do more. 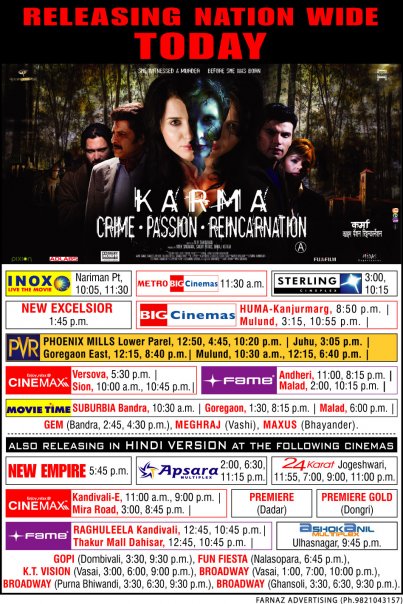 International cast of “Karma, Crime, Passion, Reincarnation” released in theaters across India in 2009.

I’m not going to go on and on with individual updates on films. We have many films coming out in March, April and May so it will be a busy next couple of months. Read earlier posts if you need updates on releases. We’re about to start signing cast and crew onto the next film “Chasing the Star” which is getting very close to being ready – a few more weeks.

Keep at it people and don’t worry about twitter followers, Star Meters or seeking validation from insecure people. Make your art respecting the business.  Seek to entertain and educate your audience. The audiences will allow and inspire you to grow. The source of your strength should not be peers that often are unhappy with themselves and seek to unseat you with words. ACTIONS SPEAK LOUDER always!

Be a doer not a talker. Okay, I’ve got to get doing so enough talking(writing):)