I’m sipping coffee on this peaceful Sunday. Beside me is a new 5 gal of Green Goblin 3.0 wine started on Halloween and by 11/4 on the full moon it was bubbling like a possessed spirit had invaded it. See what I did there? The spirit, okay back to the blog. New readers/followers from The Netherlands, welcome. Readers from Israel has been following us and again, thank you. I love this space – open for artists to stop by and listen to a story or two. To get a few updates and let you know that these battles we fight to create our art are natural. Part of the process of healing people with the power of a story. A medium that weaves so many emotions through so many of the human senses.

David Gries in THE CHRIST SLAYER

It’s been a strong week of organization and prepping to move into 2018. New announcements on MBF, our next CDI film. We added David Gries and Shane Hagedorn two other fine artists. I’ve worked with both of them and these roles are in caring hands. March will be a nice mix of old and new talent working together.   This coming week I plan to open the bank account. Small steps on the path to production.

American Film Market is underway and BMG has Forty Nights and Chasing the Star there right now. We made some announcements that the films were making their way to the UK. I also see evidence that Asia might be getting the films next. I was notified of a Singapore government ratings for Forty Nights. I will seek to confirm but I really do hope that our fans to the East can enjoy these beautiful films.

Domestically our recent goal now that we’re past Halloween, has been making people aware of the first two films in the marketplace for Christmas. Amazon Prime now has both FORTY NIGHTS and CHASING THE STAR. Watch them back to back and if you enjoyed them give them a little word of mouth or post a review. I think those films are just starting to travel a long journey of being exposed to artists worldwide. 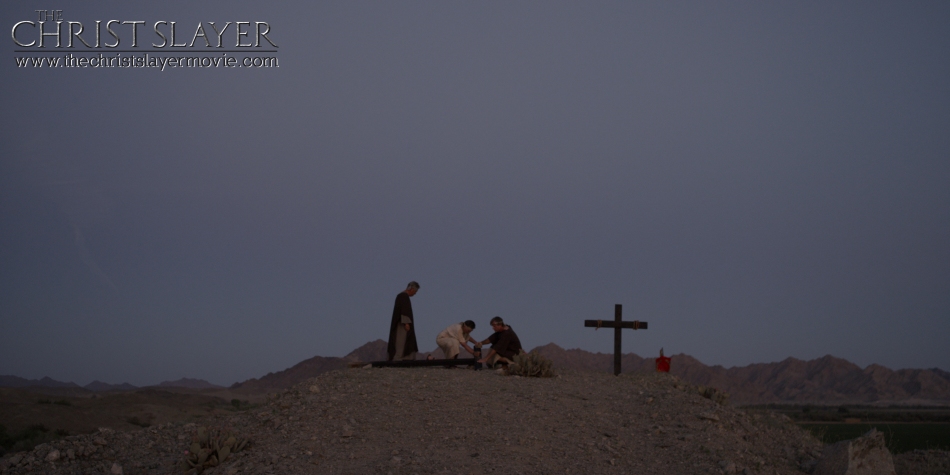 THE CHRIST SLAYER is the 3rd film in the trilogy and it’s moving right along. We released a still of it being worked on in post VFX. (Here) 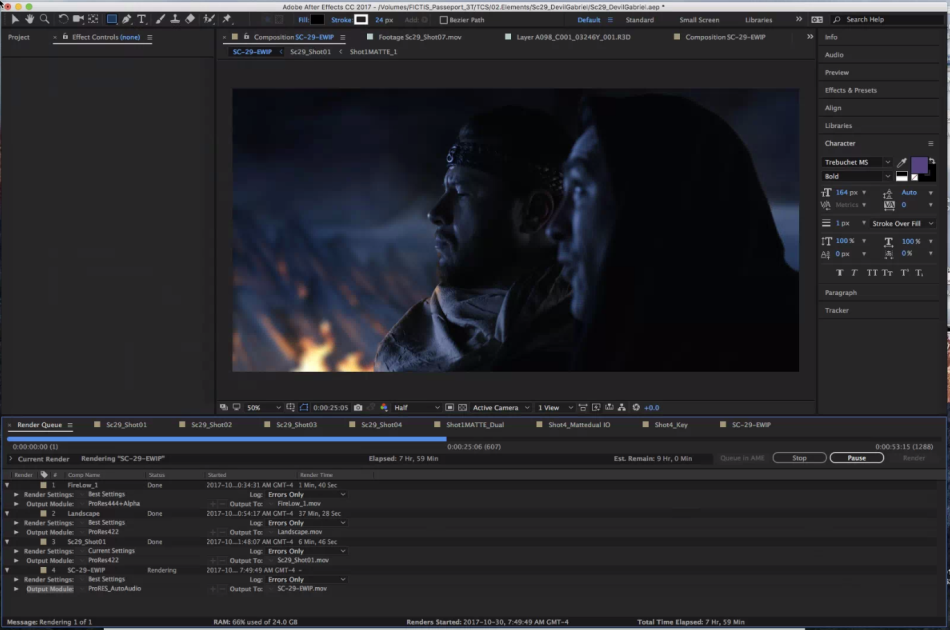 This third film will bring things together nicely. The poster is on the 3rd draft and getting stronger with each one. This film is preparing to enter music and sound design in Jan 2018. 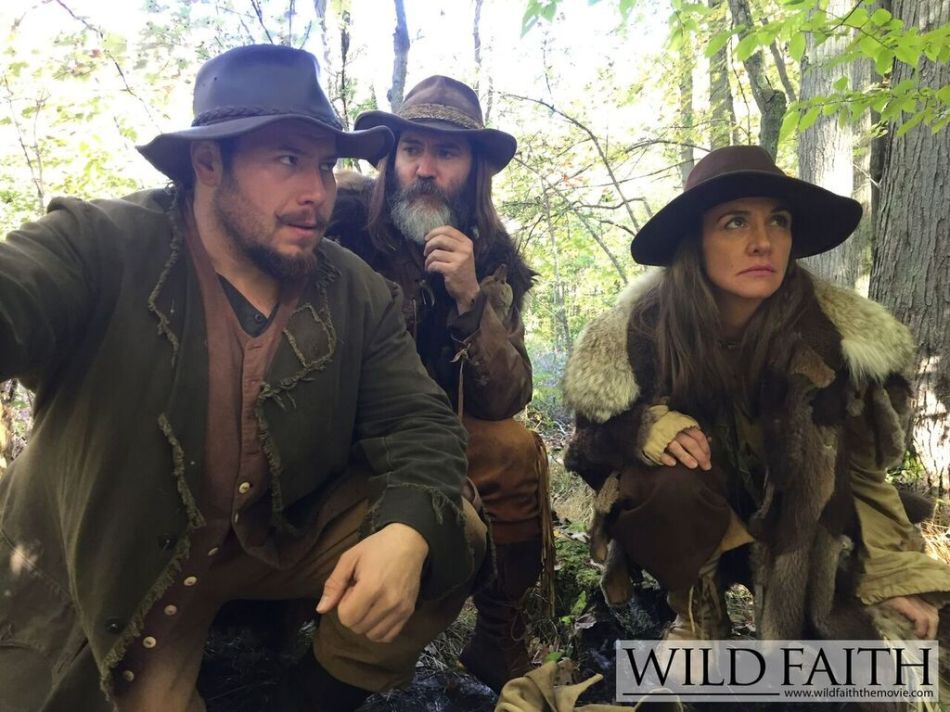 For that to go in WILD FAITH needs to come out. The music first draft is DONE save tweaks and end credit roll. We’ll start putting that together now. I have high hopes that once the film is done the full merit of a series will be seen. We’re soon to sit and watch the film with the music in. Right now mixing and balancing is underway. The 10 sec of remaining VFX footage is what we’re dealing with still. But the plan is in motion and I’m confident we’ll complete that shortly. 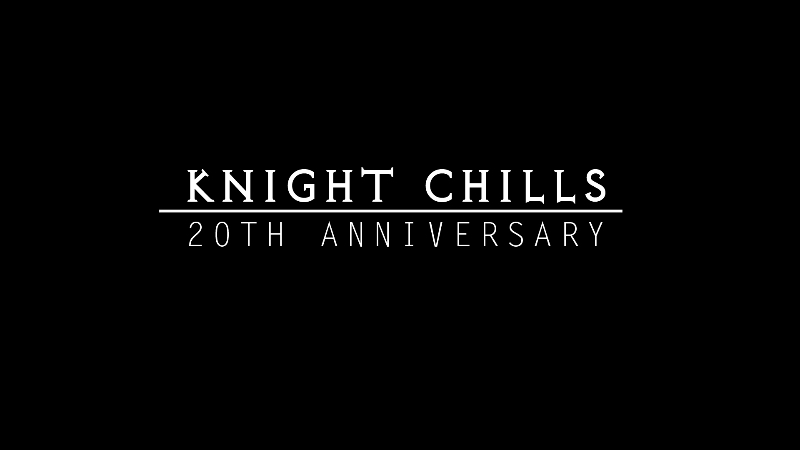 We’ve also been delivering materials to our distributor for WICKED SPRING. It is an interesting feeling bringing that film to the forefront again. I did that role 17 years ago. Crazy. KNIGHT CHILLS had a new release with the book this year and that is a great little Christmas story. I’m smiling – but I will admit for people who have not been exposed to my work having KNIGHT CHILLS, FROM VENUS or IN THE WOODS be your intro is…scary. Zac, Frank and Alex are all great roles just not current representations. These films like others have gathered fans to which again I’m appreciative. My debate as of late was to accept invitations to participate in Comic Cons on occasion to celebrate these old works. I guess as I pondered it I got a touch of insight into Jeff Daniels who wants to be known for his dramatic excellence but people often just remember DUMB & DUMBER. How many sick, lonely, troubled and just bored people did that film make laugh? Giving relief by way of 90 mins of humor. Who are we to judge what people will enjoy? Hence art is subjective. Also some of these early films had so many rocks thrown at them. Some justified but many just the rise of the troll in this new medium of inter-webs:) I still hear the AOL dial-up. But if people can embrace these films more power to them. At the 15th anniversary to sit in the Alamo theater (Kazoo) and watch people shout, laugh and play the drinking game associated with IN THE WOODS was a joy. As we move through the present towards the future we must always make peace with our past. I’m getting there. I’m looking into the “Appearance circuit” although I’ve always wanted people to see the characters before the actor. I have met thousands of fans over the years and I’m appreciative. Although I don’t appear at many of these events it’s because of new work. I had a distributor friend ask if I was going to be at AFM. (Film Market) Actually I’ve had many ask. I told this person I was in MI overseeing post on two films while we prep for our new one. I would like to attend an AFM in the near future.

In addition to MBF prep we’ve been reviewing and looking at several other CDI & CDI associated projects. I think we’re preparing for another strong slate on films. As always I really do appreciate you stopping by. I hope the season is productive and wish you all a strong week ahead. 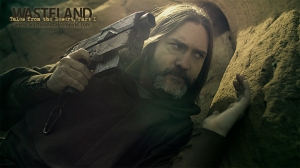 – Happy 2015 everyone! I was up early and had the coffee flowing so I could travel to Kalamazoo, Michigan to do a film commentary for the 15th anniversary release of IN THE WOODS. I awoke to a flurry of white that is supposed to change to freezing rain and back to snow. So we decided to reschedule the session. So you get my blog early and now we’ve got BBQ ribs in the crock pot and I’m going to get some office work and such done today. The holidays had me tired and some cold tried to get me but I beat it back. I don’t got the time to be sick! It was a great holiday filled with family and friends and I’m so ready to attack the new year.

We are close to announcing a couple of new film projects. Art work is underway on several films releasing and in development. Post production work keeps chugging along. We’ve been updating the http://www.cdiproductions.com website and I was stunned to see both the company site and this site had visitors/readers from over 70 countries. Let’s look at some updates in no real order.

– “Knight Chills II” script is underway and new artwork is underway. The book novelization to go with the re-release of the original will be underway this year also. I’m excited to re-visit this film. The 1st run moved 26,000 domestic units whereas much of that revenue did NOT come back home when the company went belly up. It was a major disappointment and set back at the time. This franchise is going to rise from the ashes.

– “In the Woods” 15th anniversary re-release is coming on Blu-Ray, PPV, VOD with the book by Nancy Gideon re-releasing also. There is some chatter about a sequel and a few ideas have been passed about but nothing solid.

– Assigned to Winters Film Group by CDI Distribution – 3 films. “Ashes of Eden” will lead the charge with an early release. “Donors” and the “Wicked Spring” re-release will follow. I’m told next week release dates will be set.

– CDI Releasing is also looking at directly releasing two of its earlier films “Figure in the Forest” playing multiple TV networks and “Heaven’s Neighbors” both directed by CDI’s Jeff Kennedy.

– CDI is looking at releasing more of the library into theaters in 2015.

– Foreign sales could really start picking up. We know the fans are out there and we want to get more of these stories out to them. Deals are underway and we hope to have some exciting announcements on this front.

– “Bestseller,” “Dead Quiet,” “The Terrorist” and “Wasteland Part 1” are all in post production and should all see releases in 2015.

I’ve had several projects approach me to consider acting in. One recently came from a studio head and is a pilot film that could spin-off into a series. The distribution is all set up and I’m looking forward to hearing more on this project. Also I might have a new work-for-hire script writing project which would be fun. I’m also working on a CDI commercial project which will shoot for a client this year. Overall I can say that 2015 will be a busy and productive year. I hope this holds true for each and every one of you that has put in the hard work. It doesn’t just happen but when you work smart and work hard the results will come.